NO to the Profit- Driven War on Iraq! 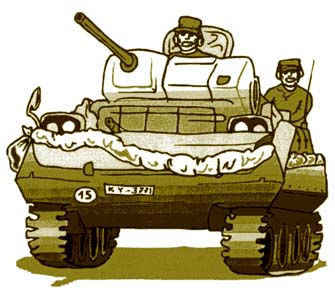 George W. and his Cabinet just ain't happy unless the U.S. is threatening to kick some ass somewhere. They've mistaken themselves for emperors and now blithely advocate first-strike use of nuclear weapons, as though they are immune to radioactivity.

Clearly, the fall of the Soviet Union has left them addled. Having no rivals of consequence, the U.S. corporate powers that own the president and Congress now openly make plans for a hostile takeover of the world! And the Democratic legislators, with few exceptions, are signing up for Georgie Porgie's war party right alongside their Republican brethren.

This is the latest phase in a permanent state of warfare U.S. rulers have engaged in since World War II. Now the "war on terrorism" has morphed into a war for "regime change" in Iraq. But before you get on board, there are a few facts you should know.

Why Bush is targeting Iraq now

The main reason Bush is launching the war drive now is to change the domestic agenda before the November election. He does not want discussion of the pitiful economy or corporate corruption, and he needs to keep the military machine humming along despite the failure of U.S. spy agencies to find any real terrorists. So old enemy Saddam Hussein becomes the new enemy.

Bush accuses Hussein of being engaged in developing nuclear weapons and having ties with Al Qaeda. Not true.

Nine thousand UN inspections of Iraqi weapons facilities took place from 1991-98. Two former chief inspectors, Rolf Ekeus of Sweden and Scott Ritter of the U.S., charge that the U.S. tried to provoke the Iraqis into blocking inspections so that it could call for direct military action. Today Ritter states unequivocally that "no substantive facts exist" to back up Bush's charge that "Iraq continues to possess and seek the acquisition of weapons of mass destruction."

How about chemical weapons? In the 1980s, the Iraqis used chemical weapons as they fought Iran with U.S. backing. Current Defense Secretary Donald Rumsfeld himself met with Hussein in Baghdad during that period and voiced no objections. And during the 1991 Persian Gulf war, it was the U.S., not Iraq, which used tons of depleted uranium as a chemical weapon, as it did again later in Yugoslavia.

Is there a link between Al Qaeda and Hussein? No believable proof has been offered. Like other Islamic fundamentalists, Al Qaeda considers secular Arab rulers like Hussein part of the problem and in need of forcible overthrow.

Oil: the booty of war

The powerful oil industry is constantly on the prowl for plunder, and Iraq sits on the largest oil reserve in the world outside of Saudi Arabia.

Oil companies are already maneuvering with the Iraqi National Congress, a totally corrupt government-in-exile that favors creation of a U.S.-led consortium to develop Iraq's oil fields once Hussein is ousted. The U.S. is using access to future oil rights to try to hold Russia, China, and France in line behind its war of oil piracy.

War is good for General Dynamics

Of important Bush appointees, 32 have ties to top weapons contractors as former executives, consultants, or major shareholders. These include the secretary of the Navy, previously a General Dynamics vice president, and the undersecretary of the Air Force. These men, who will return to private industry in a few years, have an indisputable material interest in pushing ever-greater military spending. It is estimated that by 2007 the "defense" budget will be $469 billion, 11 percent more than the Cold War average.

This bloated war spending is the pay- off to weapons contractors for their lavish campaign contributions and lobbying bonanzas, which in 2000 alone totaled $66.5 million.

Of body bags and chicken hawks

The loudest advocates in the Bush administration for aggression against Iraq have never been in battle — including the president, Rumsfeld, and Dick Cheney — and most evaded military duty in Vietnam.

These bellicose officials, labeled the "chicken hawks," don't give a damn about the thousands of casualties that will result from their single-minded pursuit of oil and power. The body bags will not contain their sons and daughters. The rich never die in capitalist wars of plunder.

Millions of people around the globe oppose this war, but the people who can stop it live here.

Before Congress passes some version of Bush's blank check to wreak havoc on the Iraqi people, our congressional reps need to hear from us. And we need to march and protest in the streets while educating in our labor unions, workplaces, and schools. If we set our sights on building a movement to stop this war of greed, we can do it.