Radical Women statement for Melbourne “Walk for Justice for Refugees” 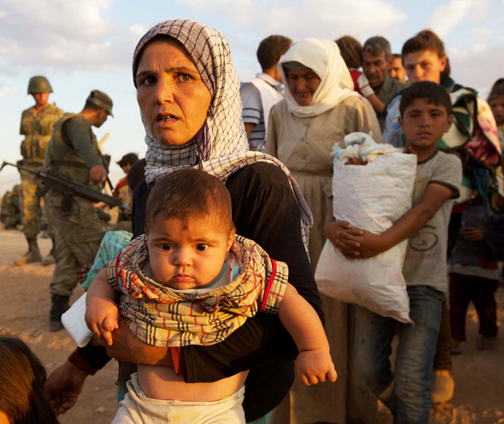 War, persecution and climate change have displaced 65.6 million people. More than 22 million are refugees. The hellholes and dehumanising control they’re subjected to show that freedom of movement in this world does not really exist.

More than half of the world’s refugees come from South Sudan, Afghanistan and Syria. Yet the countries that profit from these conflicts, which they help create, have shut their own borders. Australia is one of them.

The use of xenophobia and racism by our governments to control immigration and chill dissent at home is not new. The phony “war on terror,” aided by Islamophobia to shift our attention from the disintegrating global economy, has made bigotry even more toxic. From Europe and the United States to Australia, successive governments in power have scapegoated immigrants and refugees to aim people’s fear and anger at the victims, not the system. This is the climate in which people start listening to far-right demagogues, like Cory Bernardi and Pauline Hanson, and fascists for “answers.” In Victoria, neo-Nazi and far-right ideologues are cheering the Liberal Party’s law-and-order election campaign, which targets African Australian communities. By standing up for refugees, we resist the far right, emerging fascists and the crackdown on our collective civil rights.

Women and children are the majority of casualties in this colossal human crisis. More than half of the world’s refugees are children. Women and girls make up 86% of South Sudanese refugees. Single women traveling alone, heads of households, pregnant women, adolescent girls, unaccompanied minors and women with disabilities make up Syria’s women refugees. A gender analysis is generally ignored in the broader humanitarian travesty, but the issues women deal with are horrific. Whatever the cause — war and genocide in Tamil Eelam and South Sudan, the brutal feudal patriarchy of Afghanistan or Assad’s terror in Syria — the impact of oppression weighs heavily on women.

Women and children cop the brunt of the Australian government’s barbaric treatment. Last year, 50 women held on Nauru were refused urgent overseas medical treatment. Pregnant women, denied the freedom to birth as they choose, suffer in isolation and with limited access to interpreters. The lack of decent ante- and post-natal care contribute to post-natal depression and other mental ill health and an inability to bond with their babies. Denying the right to terminate an unwanted pregnancy — unwanted because of rape, poor health or the prospect of raising a child in these concentration camps — is another form of cruelty. The refugee crisis is a feminist issue.

Why can capital and those who control it cross borders freely when other humans can’t? Why are people, who have no recourse but to risk their lives and those of their loved ones to get here, kept out? Why are taxes taken from education, health, housing, transport, welfare and other vital services to fund wars, elaborate border protection and increased policing and surveillance at home? The plight of refugees is an international class struggle.

Radical Women calls for the following actions. All refugees must have automatic entry and equal rights —
* open the borders, close the detention centers
* equal citizenship rights for all
* stop racial profiling by the state, end the law-and-order assault on our civil liberties