Of Politics and Pussyhats 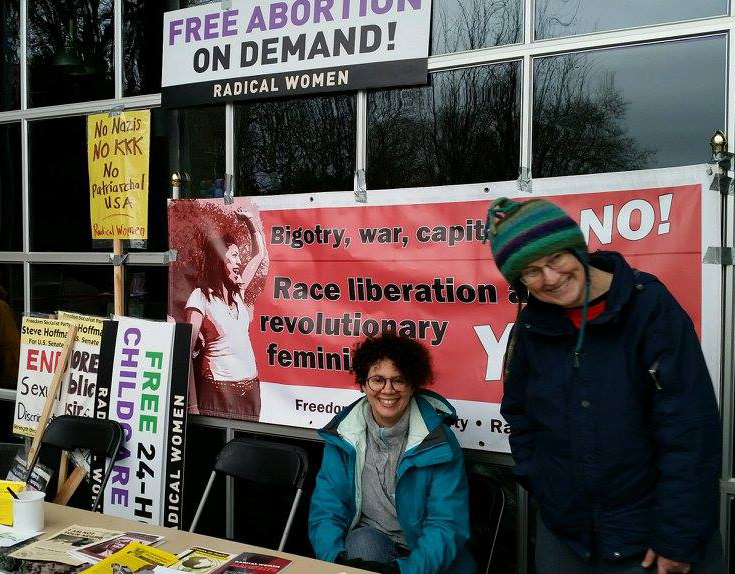 The #MeToo movement and the massive January 20th Women’s Marches have both rallied feminists and caused unexpected fallout. Tonight we’ll analyze the significance of these events and the furor surrounding them. What criticisms are legitimate and what do the problems signify? Where is the backlash coming from? These are some of the questions I look forward to discussing with you.

Last year’s women’s march was the largest demonstration in the history of this country, with over three million marching in outrage over a president who denigrated women and bragged about sexual assault. Marchers confronted the right-wing backlash against reproductive rights and civil rights. It was a very multi-issue march that raised concerns about everything from Black Lives Matter to climate change.

This year, women are still pissed off about harassment and other abusive treatment and the outrageous actions of the Orange Julius Caesar in the White House.

In October, feminist reporters exposed Hollywood producer David Weinstein’s decades of sexual assault of young actresses. This inspired an avalanche of stories of other prominent cultural figures and politicians being exposed for their harassment. More and more women are tired of suffering in silence and are speaking out and demanding accountability.

With this political climate, women continue to rise up. Hundreds of thousands of women and allies in Seattle and nationally came out again this year to march for women.

This is good thing! It’s wonderful when people become active politically on their own behalf. If provided with good leadership, they are likely to become much more aware of the problems faced by other people and to learn the value of solidarity.

One would think this would be obvious, and that only conservatives and misogynists would oppose this sea-change in women’s activism, but there’s also been push-back from unexpected quarters.

For example, why do some folks continue to snipe at the #MeToo movement by defining those affected as white and privileged after it’s been brought out and acknowledged that the phrase MeToo was first coined by a Black woman? Why do some folks sneer that sexual harassment is a middle-class white woman’s problem, when it was Black attorney Anita Hill who riveted the nation’s attention to the problem in the early 1990s? Why do some who define #MeToo as white ignore the hotel workers, farm workers and other low-paid immigrants and women of color who have been fighting sexual harassment for decades through job actions, lawsuits and union negotiations? Ignoring their struggles and leadership just makes them invisible once again.

Controversies about the 2018 Women’s March

Some people went on attack against the 2018 Women’s March accusing it of being white and transphobic before it even happened. Seattle Black Feminists, for example, posted a blog about the “white” women’s march that announced, “It was only when white women came under the spotlight that they decided to take ‘action’ and this I will not support. I think the Women’s March is nothing less than an act of violence against women everywhere, especially those who have worked to garner attention to trauma but have been ignored.” This is pretty off-base, especially when the Seattle Women’s March organizers, despite some serious political problems, were mostly people of color.

Seattle Black Feminists and others made much ado about pussyhats, claiming they were racist and transphobic representatives of Caucasian vaginas. In reality, the hats were a creation of a Jewish woman and an Asian American woman who designed a simple hat with cat-ears as a joking reference to Trump’s “grab ‘em by the pussy” insults. The designers used the color pink to reclaim the traditionally feminine color as a symbol of power. The hats were intended to show solidarity with a sea of pink–and did that quite well. No one was required to wear one, and many people improvised with hats of different colors and designs.

This year, because of criticisms that the hat excluded transgender women and women of color, organizers of the Pensacola, Florida march discouraged the hats from being worn. One organizer stated, “Not every woman has a vagina and not every person who has a vagina is a woman.” Organizers put out a statement that “the Pink Pussy Hat is white-focused and Eurocentric in that it assumes that all vaginas are pink.” Such charges led to outrage over a pussyhat being placed on a statute of Harriet Tubman in New York, and to accusations to marchers: “White woman, you know you voted for Trump!” I seriously doubt that many of the Women’s March participants voted for Trump–or saw themselves as wearing vaginas on their heads.

With all this furor over hats and calling on women of color and trans people to stay away instead of mobilizing them to come make their voices heard, some serious political problems have been largely overlooked.

For instance, nationally, the theme of the march was “Power to the Polls,” limiting the scope of action to the mid-term elections and to getting Democrats into office. Unfortunately, we see women’s rights erode whether it’s a Republican or Democrat in power because both parties uphold the capitalist system which thrives on patriarchy, racism and inequality. In addition, national demands of the 2018 march, though multi-issue, were scaled back and softened.

The Seattle march had a number of problems that resulted from the reformist, liberal politics of the organizers. It was not a coalition that operated democratically, and it implemented its decisions very bureaucratically. Even though it had women of color as organizers, the march itself was majority white. This may be partly due to the counter-organizing by some women of color, but it also reflects a lack of outreach to women of color. This takes time, and the march was very hastily pulled together. But outreach to Black women and Latinas, and a leadership process that involves them, are essential to overcoming the distrust of feminism as only being concerned with needs of privileged women.

Radical Women (RW) attended two local organizing meetings to try to impact its direction. We urged march organizers to have a plan for community defense against disruption by the far-right Patriot Prayer group. One leader wanted no response at all– saying it was best just to ignore them. Instead of organizing volunteer security as every other political march does, the organizers hired a security service called Crowd Management Services or CMS.

At the pre-march rally, RW and others formed a line between marchers and Patriot Prayer and rallied the crowd in chants against far-right attacks. This disciplined line was very effective in sidelining Patriot Prayer thugs and preventing one-on-one fights. However, CMS security guards told us we could not use our bullhorn even though Patriot Prayer was using theirs. Later CMS guards tried pushing our group out of the park and into Patriot Prayer. CMS allowed Patriot Prayer to disperse into the crowd and continue their anti-feminist harassment while the security guards did nothing. Radical Women has sent the march organizers a letter protesting how CMS treated the anti-fascists as the problem. The issue of how to fight fascism is one that will have dire consequences for feminists and other movements. We know from our experience that only a militant united front can stop them.

Another alarming move to tame the women’s march was evident here in Seattle. In the leaflet Radical Women distributed at the march, we warned against the conservative impact of an organization called the Truman National Security Project, which had a lot of influence on the organizing team. This so-called “liberal think tank” represents the Democratic Party wing of people allied with the State Department and corporate and military interests. The State Department upholds an imperialist agenda that hurts and kills women of color and working people around the world.

A mass movement of women is evidently quite a threat to the status quo if these forces are trying so hard to subvert it, seduce it with funding grants, and co-opt it into a docile consumer base and political constituency.

I think the marches’ political weaknesses are much more serious than pussyhats. While racism and transphobia certainly exist and must be combatted within the feminist movement, it is counterproductive to boycott the struggle instead of pushing it to be more.

There is a real problem when identity politics are used to ensure that the movement will truly be white, cis-gender, and elitist. Identity politics is the tendency of an oppressed group to organize just based on their own group and not see the need for building a broader united front in solidarity with other oppressed people. It’s also called cultural nationalism–where people overlook class differences and put their own race above all else, even pitting the struggles of different oppressed people against each other.

Quiet as it’s kept, many women of color and transpeople have been part of the women’s marches and the #MeToo movement. To deny this is to once again make them invisible. Encouraging nonwhite, queer and trans people to give up their space does not help them or the movement, which needs the radical outlook that comes from their confrontations with multiple oppressions.

As socialist feminists, Radical Women recognizes the need for a working-class, multi-racial women’s movement that incorporates the demands and leadership of the most oppressed. The line of class is the biggest divider in determining someone’s political allegiances, as we saw at the Seattle march where women of color organizers didn’t prevent the march from being bureaucratic and disrespectful to Indigenous women.

White and Black women in the U.S. have a long history of working together for racial and gender equality. They collaborated in the anti-slavery and civil rights movements, and in fact these movements sparked the first wave and second wave movements for women’s equality.

The suffrage movement suffered a disastrous split after the Civil War when the issue of legalizing the vote for Black men was pitted against the former goal of universal suffrage for women and men of all races. The bitterness of some formerly radical leaders led some, such as Susan B. Anthony, to make some very racist statements. But the split was not purely on race lines: Elizabeth Cady Stanton and Susan B. Anthony, with support from some African Americans such as Sojourner Truth, campaigned against any amendment that would deny voting rights to women. On the other side were former allies including Black leader Frederick Douglass and white abolitionists such as Lucy Stone, Antoinette Brown Blackwell and Wendell Phillips, who argued that women’s suffrage would have to wait.

Despite the split, women of color did not quit the movement but formed their own organizations where they fought for both Black and women’s rights.

The modern civil rights movement also suffered a split when frustrated male leaders decided that the movement’s problem was that Black women were too dominant. Black women were pushed into a subservient role for the sake of elevating Black manhood. Michele Wallace and other Black feminists bravely wrote of this split, in which the movement also expelled whites and turned away from a struggle against the white capitalist power structure.

We can’t again allow the movement to be torn along race and gender lines because that’s what the capitalists want.

What we need is a women’s movement that is divorced from the two party system. To raise truly radical demands that will help women, such as abortion on demand, state funded childcare, and rent control. We also need a movement that addresses racism and police violence through mechanisms such as independent civilian police review boards. And of course this movement must be inclusive of women of color, queer and trans people. Oppressed groups cannot be liberated in isolation. We need solidarity. The women’s march represents a crack in the system that has the potential for revolt. Feminists, anti-capitalists and civil rights activists should not give up on a movement with the opportunity to raise people’s consciousness and learn the steps of successful collaboration.