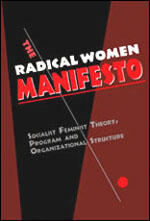 The position of women around the world is as much one of second-class status today as it was in the 1950s, before the birth of the modern feminist movement.

International capitalism has proved itself incapable of providing the most elementary democratic rights for women. Instead, the system increasingly depends upon the exploitation of women for its very economic survival.

Today, women are still discriminated against in jobs and professions, education, legal status, social freedoms, political life, and family/sexual roles. We are oppressed as a sex and for our sexuality, super-exploited as workers, and triply oppressed as working women of color. And this subjugation, despite years of a mass international women's movement, is accelerating daily! Capitalism is in desperate straits and will even resort to smashing all civil liberties and ushering in fascism — the ultimate destroyer of women's rights — to protect its profits.

WHO WE ARE      Radical Women is an international organization, founded in 1967 in the United States, where we are the oldest socialist feminist group in existence. We are women of color, Jews, and whites, workers and students, queers and straight women, the old and the young.

Radical Women is dedicated to exposing, resisting and eliminating the inequities of women's existence. To accomplish this task of insuring survival for an entire sex, we must simultaneously address ourselves to the social and material source of sexism: the capitalist form of production and distribution of products, characterized by intrinsic class, race, sex, ethnic and caste oppression. When we work for the revolutionary transformation of capitalism into a socialist society, we work for a world in which all people may enjoy the right of full humanity and freedom from poverty, war, racism, sexism, homophobia, anti-Semitism, and repression.

We believe that the liberation of women is indissolubly linked to the battle against all the burning injustices that define capitalism. We constitute at least half of every stratum of the exploited and are part of every struggle for freedom. We experience in life the commonality among all forms of subjugation and their shared origin — the insatiable demands of capital for profit. Thus, we cannot isolate our struggle by creating a single-issue movement that ignores the multifaceted reality of women's oppression. All oppressed groups are fighting the same enemy, and we must build a movement that can bring our separate struggles together. Unified we become strong.

Radical Women believes that the oppression of women is a political, legal and economic question of first priority. Women's political leadership is decisive to the outcome of all the separate movements, and accordingly, we are destined to play a vanguard part in the general movement for revolutionary social change.

We believe that solidarity and mutual aid of all the oppressed are necessary for the genuine liberation of any one sector: either we all are free or none of us is free. Only the unity of people of color, indigenous and ethnic minority liberation fighters, the working class, the youth resistance, the women's movement, sexual minorities, prisoners, the aged, people with disabilities, and all those tyrannized by capitalism can free us from our collective oppression. At the same time, we cannot and will not acquiesce to male chauvinism in the guise of an unreal “class unity” or “race unity” or “peace movement unity” or any other kind of “unity” that denies or tolerates the special exploitation of women workers and ignores the distinctive subjugation of women as an entire sex.

“Unity” that does not respect the different experiences and levels of oppression within society is arrogant, false and eventually self-defeating. “Unity” based on the lowest common denominator perpetuates caste differences between the privileged and unprivileged by emphasizing the demands of more fortunate workers at the expense of the greater needs of the most exploited.

“Unity” at our expense is merely perpetuation of women's subordination under a pretentious and hypocritical label.

THE VANGUARD ROLE OF WOMEN       As political radicals, we anticipate and organize toward a revolutionary new world, reborn free.

As women, we anticipate and organize toward a new historical level of human relations based on equality and mutual respect.

As Radical Women, we understand and promulgate the concept that the Woman Question is a decisive issue in the unfolding international revolution because the exploitation of women has created a specially oppressed sex whose potential for revolt and capacity for leadership are second to none.

The current mainstream leadership of the women's movement is largely professional, middleclass and white. But the movement was founded by radicals and today its leftwing leadership is gaining strength, rising from the vast ranks of militant women from the working class, especially women of color and lesbians.

These women are doubly- and triply-exploited; they come into direct and daily conflict with bosses on the job and with racists and sexists on every level of life. They develop a keener awareness and consciousness of the triple nature of oppression — class, race and sex — than is possible for most white, nonworking, middleclass women.

The raw battle for survival in the everyday world has equipped women of color, women workers, and lesbians with a talent for discipline and respect for theory because the life of the poor woman, the working mother and the independent woman depends upon clearheadedness, self-control and organization. Accordingly, they demand these qualities in any movement that claims to be mature and realistic, and have no patience for idlers, triflers, coquettes, leeches and self-seekers within the movement. They have the least to lose and the most to gain by eliminating capitalism. They are radicalized and tempered by their actual victimization in life, not just by intellectual choice. Their experience is indispensable to a movement that must challenge the pinnacles of the bourgeois state and ultimately go so far as to seize power on behalf of all the humiliated and outcast.

It is precisely such women, who join nothing lightly but are ready to devote their lives completely when they do commit, who are destined for leadership of the entire movement. It is the historic responsibility of the movement to make an ideological connection to these women, a connection that always exists in the real world of jobs and workingclass/people of color communities, where women must fight together and, in the course of those battles, find solidarity and comradeship.

Our struggle for women's emancipation is not an easy one. The changes needed to free women from the bondage of inferior economic and social status involve a prolonged conflict, an endeavor that is met with great hostility and resistance at every step of the way. This resistance is twofold: from outside enemies as well as from within the movement, which is itself fraught with its own contradictions and inconsistencies.

Radical Women knows that the women's movement will have ups and downs, and that only a confident grasp of history, social theory, and tested organizational principles can provide the ballast to weather the storms ahead. The Radical Women Manifesto is our guide to achieving equilibrium amidst the chaos and corruption of the society around us, a guideline firmly grounded in women's historical past — in the beginnings of our oppression as a sex.


Read more from the Manifesto or order a copy