KARACHI, April 15: Speakers at a conference on Monday criticised the past governments for not taking measures to protect the rights of homed-based women workers numbering around eight million across the country.

They asked the caretaker governments to recognize the status of women workers in general and devise policies particularly for the cause and welfare of home-based women workers. The government should also ratify the ILO Convention-C177, that envisaged equal treatment with home-based workers in relation to other wage earners performing the similar work, they demanded.

The conference was organised by the Home-Based Women Workers' Federation (HBWWF) as its yearly feature and was attended by women workers from various districts of the province.

The conference through unanimous resolutions demanded that the government announce the national policy on home-based workers, enact laws to recognise home-based workers as workers and safeguard their rights, allow the HBWW to enjoy the core labour standards, along with right of association and collective bargaining agent.

HBWWF general secretary Zehra A Khan said that the home-based workers should show unity in their ranks and continue struggle for their rights and relevant legislation. It was a clear violation of human right standards that the home-based workers were not being taken as workers of the formal labour sectors, she said, adding that efforts were needed to expose those exploiting women workers on one pretext or the other.

National Trade Union Federation president Rafiq Baloch said that his organizations stood beside the home-based women workers and would raise voices for benefits to them similar to what were allowed in the case of industrial workers.

NTUF deputy general secretary Nasir Mansoor said that it was strange to note that none of the political parties could do anything positive in the case of home-based women workers who formed 65 per cent of the entire home-based workforce in the country. 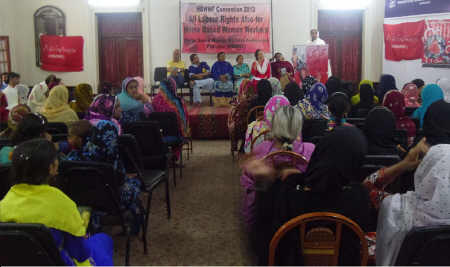 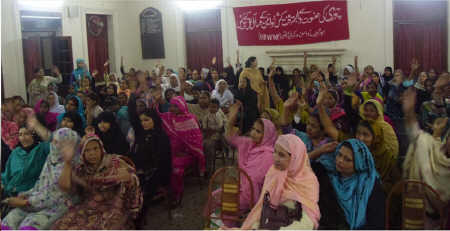