Reports mount daily of another Black life lost at the hands of the police or another acquittal of a guilty cop. We need a concrete mechanism to exert community control over the police. Please attend this first organizing meeting to build a New York City campaign for an Elected Civilian Review Board.

An Elected Civilian Review Board (ECRB) would be empowered to investigate and act on all complaints of police misconduct, and would replace the currently existing NYC Civilian Complaint Board that provides little to no recourse for victims of police brutality or misconduct. ECRB members would be elected at the grassroots community level, not appointed as are the members of the current Complaint Board in NYC. The inherent role of the police is to uphold and protect the monied interests that run our cities. An ECRB would be a community-led force that would place a significant check on the police and help save lives now.

Your input and energy are needed! The meeting agenda will include a discussion of how an ECRB would function in NYC, drafting of a timeline to organize for a 2016 NYC Referendum, and next steps for action.

This meeting is initiated by Radical Women and the Freedom Socialist Party, who are committed to working with others through an open, respectful, democratic structure, and a platform that represents those communities most affected by police violence.


Be part of a contingent calling to “End Police Violence and Racial Injustice Through Community Control” at this Newark, NJ action. Help carry banners, sign up volunteers, and hand out fliers

The Lincoln Monument in Newark, New Jersey
(corner of Springfield Avenue and West Market Street)
Meet-up with the contingent at the Bank of America parking lot across the street from the Lincoln monument. Take NJ Transit out of Penn Station to Newark Penn Station Stop.

If you have questions, want to travel with other contingent members from NYC, or volunteer, email Eliasholtz@gmail.com.

An informal afternoon discussion of Hansberry’s life, plays and activism.


Sunday, June 28th
Save the date and march with the Radical Women and Freedom Socialist Party contingent in the NYC Pride March. Call Elias at 917-244-4505 for meet-up time and location.

Sunday, May 3, 3:00pm
May Day Celebration & Book Launch Party for
TALKING BACK: Voices of Color

Come be a part of launching this dynamic new anthology featuring voices of youth, feminists, political prisoners, immigrants and history-makers. Edited and with an introduction by poet Nellie Wong.

Light refreshments will be served.

Sponsor:Comrades of Color Caucus of Radical Women and the Freedom Socialist Party

March with Radical Women for International Women's Day and demand justice for Nestora Salgado, a naturalized U.S. citizen and political prisoner in Mexico.

Nestora is an indigenous leader in her hometown of Olinalá in the state of Guerrero, where she was elected as head of the local community-based police. Arrested in August of 2013 on bogus kidnapping charges by corrupt officials, Nestora continues to be held in a maximum security prison despite having been cleared of all charges by a Mexican federal judge. We must free her and all political prisoners! For more info, visit www.freenestora.org.

On Sunday, March 8th, meet up at 12 noon at Herald Square, W. 34th Street at 6th Ave. & Broadway (subject to change in case of inclement weather). See details in attached flyer. Look for the Nestora Salgado banner! Call Radical Women at 212-222-0633 to meet up. 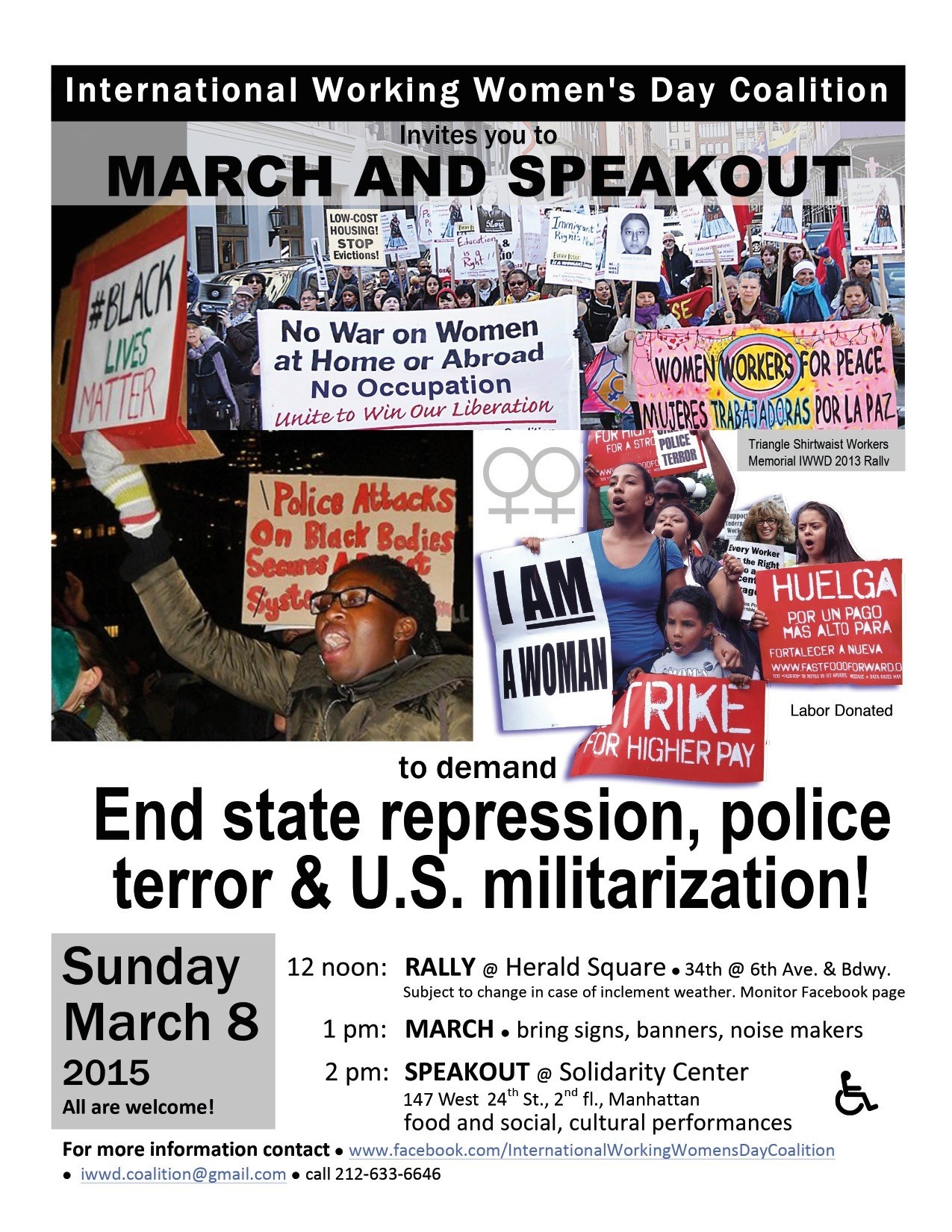 Saturday, February 28, 7:00pm
Black History Month Community Meeting -
A Call to Action: End the Siege on Black Lives!
Come strategize around critical issues of race and resistance. These dynamic speakers will kick off an open conversation on how to sustain the movement against police violence and address poverty, jobs, gentrification, and schools.

Leah Z. Owens, leader in the Newark Education Workers (NEW) social justice union caucus that organizes Fight Back Fridays, advocates for students’ rights, and mobilizes against budget cuts and the privatization of public education. Sarah Scott, Seattle anti-police brutality organizer who was a featured speaker at the annual MLK Day march and rally in her city. Scott is a restaurant worker and was a leader in Seattle’s $15/hour minimum wage campaign.

Sponsor: Comrades of Color Caucus of Radical Women and the Freedom Socialist Party For more info or to reserve childcare, call 212-222-0633 or email nycfsp@gmail.com.