Take part in a discussion on gender-variant identities, with a focus on fighting the oppression that trans people face under capitalism. Brainstorm how to advance trans issues in political and social justice movements.

Thursday, October 24, 7:30pm
Mobilize to End Domestic Violence and Free Marissa Alexander!
Marissa Alexander, African American domestic violence survivor, was granted a new trial on September 26, a victory for Free Marissa Now campaign organizers and supporters across the country. Alexander was sentenced to 20 years in Florida for firing a warning shot to defend herself from her abusive husband.

Join in a discussion of how to free Marissa Alexander and safeguard women's right to self-defense. We will write letters together to Florida authorities about Alexander's case and to protest mandatory minimums. Get the latest updates at http://freemarissanow.tumblr.com.

Meeting will also feature an update on Radical Women's work to make quality public education free and accessible to all children in Central Harlem. Your involvement is needed!

Thursday, September 19, 7:30pm
Defend Harlem's Public Schools Organizing Meeting.
Bring your energy and ideas to a discussion of how to mobilize a fight against the charter school takeover of public schools and housing projects in Central Harlem. Also featured: a report-back from the 50th Anniversary March on Washington held on August 24. 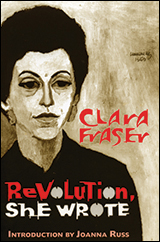 Through columns, essays and speeches spanning 40 years, Clara Fraser's book provides a compelling exploration of the meaning of socialist feminism, linking the power of Marxist theory and working-class feminism. Selected readings will illuminate the interconnections of racism and sexism, lessons from battles for queer rights and free speech, and strategies for overcoming obstacles to revolution.

Feel free to join any session.

Sponsored by Radical Women and the Freedom Socialist Party

For information or to buy the book call 212-222-0633 or email fsp@nyct.net Revolution, She Wrote can also be purchased online at www.RedLetterPress.org

July
Session 3: Brooklyn – July 8
Readings -
Socialist Feminism: Where the Battle of the Sexes Resolves Itself, pp 86-96

Sat., Sept., 14, 1:00pm
All out to Free Marissa Now!
September 14th Nationwide Birthday Actions
Radical Teach-In & Tabling Event
Marissa Alexander is an African American mother and survivor of domestic violence from Jacksonville, FL. Three years ago, she fired a warning shot into the ceiling to defend herself from a life-threatening beating from her estranged husband. Despite the fact that Marissa caused no injuries and has no previous criminal record, and despite Florida's "Stand Your Ground" self-defense law, she was arrested, prosecuted and sentenced to 20 years in prison.

Nationwide actions in support of Marissa Alexander have been called for Saturday, September 14, in honor of her birthday. Join Radical Women and other Marissa Alexander supporters in distributing informational flyers and talking to people about her case.

For more information about this event, call 212-222-0633 or email nycradicalwomen@nyct.net. Radical Women is part of Free Marissa Now, a national coalition of organizers and people who are mobilizing to support Marissa's freedom from prison. Visit http://freemarissanow.tumblr.com or www.facebook.com/FreeMarissaNow

Wednesday, August 21, 7:30pm
Special Meeting to Commemorate Women's Rights Day 2013
Gender, Race and Voting Rights
On August 26, 1920, U. S. women won the right to vote after a long, hard struggle by feminists and their allies. In 1965, Blacks finally won the vote in reality with the passage of the Voting Rights Act, a major Civil Rights Movement victory. In June 2013, the U.S. Supreme Court gutted the heart of the Voting Rights Act, dealing a huge blow to African Americans and other people of color. Bring your ideas to a discussion of what the recent Supreme Court decision means and how we can save the right to vote for everyone.

The meeting will also include an update on a community campaign to defend the public schools in Central Harlem, and plans to attend the 50th Anniversary Commemoration of the 1963 March on Washington to be held in D.C. on August 24th.