Radical Women's home-baked specials are back! Let us do the cooking so you can delight coworkers, family and friends while helping the fight for women's rights and social justice. Click here to view the order form and place your order for mouth-watering homemade treats, from brownies and muffins to anti-imperialist ANZAC cookies and tasty protein balls.

Mail your completed order to: Radical Women, PO Box 308, Brunswick Vic 3056 or order by email: radicalwomen@optusnet.com.au If paying by cheque, please make your cheque out to Radical Women. Or netbank to Radical Women, BSB 063150 Account 10047589, with your name & "Bake Sale."

Come down to Solidarity Salon for an afternoon of sharing struggles and highlights of 2017 and celebrating RW's 50 years of international rabble rousing. Pitch in your ideas for more seditious organising in 2018 and fighting for a truly equal, harmonious world.

All genders are welcome. We look forward to seeing you!

For more information, please phone 03-9388-0062 or email radicalwomen@optusnet.com.au. You can join the facebook event here.

Sunday, 28 October, 6.30pm
Celebrate the Russian Revolution on its 100th Anniversary
Down with All Tyrants!

Celebratory feast in the culinary tradition of the Soviet Republic catering for vegans, vegetarians and meat eaters.

Solidarity Salon, 580 Sydney Road Brunswick. Tram 19 (stop 24 or 25) or Upfield railway line (Brunswick or Anstey). There is plenty of free parking at the rear (enter from Staley Street).

Hosted by Radical Women and Freedom Socialist Party. For more information and to book, please phone 03-9388-0062 or email radicalwomen@optusnet.com.au.

Would legalising same-sex marriage bring LGBTQ people closer to equality? The "Vote YES" campaign says it represents equality and love; contending that all that is needed to make society a fairer, more just place for all is for same-sex marriage to be passed. "Vote NO" advocates say the institution of the family is under attack and children's gender identities will be undermined.

What have marriage and the nuclear family brought to women and queers? Who is being left out of the debate? What further battles are needed to win liberation for everyone?

From Europe, to the U.S. and Australia, neo-Nazis are mobilising. If not stopped now, they could grow into a fascist movement, capable of crushing the capacity of workers and the oppressed to organise. In Germany 80 years ago, this resulted in concentration camps. What is fueling this Nazi resurgence? What role do far-right politicians, like Trump and Hanson, play? And the liberal media? Why do police direct their force against anti-fascists to protect the fascists? What must we do to stop the fascist threat?

Sunday Sessions will take place every 2nd Sunday for two hours.One dedicated hour will be themed around a small set of articles about a current or upcoming topic of activism.

RW is a part of the CARF united front. We and our sister organisation, Freedom Socialist Party, are building a united, disciplined contingent for the CARF counter-action and welcome all who want to go with us. To participate in the contingent, contact radicalwomen@optusnet.com.au.

Neo-Nazis will be at the Yemini rally. The events of Charlottesville show why we must stop them. Protests in Boston showed how this is done: turn up in our many thousands and overpower them with our massively superior numbers! Join the contingent and be part of a decisive victory in Melbourne.


Neo-Nazis are planning an "Australian Pride March" on Sunday, June 25. First, they targeted Muslims. Now, they are coming out openly about their broader agenda, focusing on refugees and immigrants, the African community, trans people and the Left. The Australian flag is their symbol for "traditional Australian morals and values." This means white Australia, genocide of First Nations, workers' power destroyed, women ruled by patriarchs, and LGBTIQ people back in the closet.

We cannot give fascists the streets. We can't let them recruit and grow. Join Campaign Against Racism and Fascism (CARF) in stopping them. Our strength is our unity, diversity and numbers.

Southwest of Salem:
The story of the San Antonio Four


In 1994, four working-class Latina lesbians, not long out of high school, were tried and convicted on false charges of gang raping two young girls. Liz Ramirez, Cassie Rivera, Kristie Mayhugh and Anna Vasquez became the San Antonio Four - victims of homophobic hysteria that was rampant in the U.S. in the 1980s and '90s.

This is a story of victims refusing to give in. The women fought back against a nationwide, paranoic belief that queers prey on children, a view that influenced law enforcement, from police to judges, and infected institutions, from pediatrics to childcare. Together, Ramirez, Rivera, Mayhugh and Vasquez insisted on their innocence against intense legal pressure. They finally won their exoneration in 2016.

Southwest of Salem exposes a dark past, and it's a warning for the present. Latinas are second to Black women in being over-represented in U.S. prisons. Trump's presidency is drawing from systemic racism, sexism and homophobia to pit working people against each other. Imagine what a movement, with the tenacity, courage and unity of these four women, could do!

Doors open at 5.30 pm, and the program starts at 6.00 pm
A midwinter dinner follows the film, including vegetarian, vegan and gluten free dishes 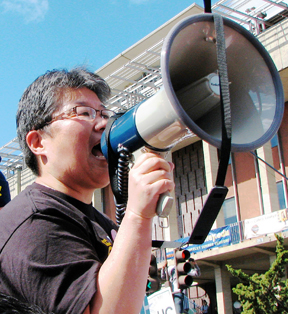 Get a view of class struggle inside imperialism's centre. Hear about Trump's rise as part of a reaction long in the making, the inspiring mass protests with women and people of colour taking the lead, a new vision for the U.S. and what it will take to win.

Buffet dinner following presentation - $10 donation
Will cater for all diets, including vegan and gluten-free.


Don't miss this very special event to welcome an organiser from the front lines of resistance in the United States.

Nancy, a Japanese American lesbian, is a public sector worker and trade unionist from San Francisco. She travelled to Washington DC as part of the Socialist Feminist Contingent in the massive protests at Trump's inauguration. A veteran fighter against the far right, Nancy is a co-founder of the Bay Area Coalition for Our Reproductive Rights. And she has gone nose-to-nose against fascists and neo-Nazis, from South Carolina to the West Coast.

She has authored many "Voices of Colour" columns in the Freedom Socialist newspaper and recently wrote a soap box piece, which links the internment of her Japanese American family during World War II with today's Islamophobia. A past National Organiser for Radical Women, Nancy is a founding member of the National Comrades of Colour Caucus, a leadership body comprised of members of colour in both the Freedom Socialist Party and Radical Women.

Mix and mingle with Nancy in a relaxed atmosphere and be inspired by some of her writing.

Bar opens 6:30pm.
Brunswick style multicultural dinner served from 7:00 pm for a $10 donation.
Meal will cater for a range of diets, including vegan and gluten-free.


This groundbreaking Radical Women document by Nancy Reiko Kato explores the important leadership role of women of colour in social justice struggles. We'll discuss the challenges and rewards of organising across colour lines and building a united feminist movement for revolutionary change. All welcome!

Lunch will be available for an $8 donation.

To get the reading for $5, or for more information, email radicalwomen@optusnet.com.au or phone 03-9388-0062. If you're on Facebook, join the event here.

Join in celebrating women's unstoppable revolutionary struggle for freedom - from the strike of immigrant garment workers in New York that inspired International Women's Day to this year's global Women's Marches. We will explore how gender, race and sexuality are interpenetrating battlefronts in this patriarchal, racist, profit-driven world - and how class unifies our struggles. We'll pay tribute to the Russian women workers who ignited the world's first socialist revolution on 8 March, 100 years ago. And we'll discuss how to finish what they started. All genders welcome!

A dinner, with dishes from around the world and catering for vegans, served at 6.30 pm for a $10 donation. The discussion starts at 7.00 pm.

Friday, 10 February, 6.00 pm
Take a stand against the far right with Radical Women!


Far-right federal Members of Parliament, Cory Bernardi and George Christensen, will be key speakers at a fundraising dinner hosted by the Islamophobic Q Society. Campaign Against Racism and Fascism (CARF) has called a protest action.

The $150-a-head dinner is to raise money to defend two Q Society leaders in a defamation case for their part in a racist scare campaign against Halal Food. Publicly, the Q Society focuses on anti-Muslim hatemongering. Its political arm, the Australian Liberty Alliance, is open about the broader agenda: It is anti-union. It defends the "natural family" against marriage equality and women's reproductive freedom. It advocates against "special" treatment - code for opposing programs to combat the historical oppression of First Nations people.

Stand up against the far right! Join the contingent of Radical Women and the Freedom Socialist Party. For information about CARF's protest (location to be advised), click here.


Dreading a Trump presidency and its global impact? Fed up with a system that lets the rich and powerful flagrantly rort tax money while setting Centrelink on welfare recipients for "debt recovery"?

Then come to Radical Women's first organising meeting for 2017. Let's talk about anti-fascist organising, building strong unions, standing up for justice on all fronts and socialist feminist study for guiding our action. Bring your perspectives and ideas, join like-minded thinkers and do-ers, roll up your sleeves and help RW plan for the times ahead. You're needed!

A summertime dinner, catering for vegetarians and vegans, served at 6.30 pm for an $8.50 donation. The meeting starts at 7.00 pm. All genders are welcome!