Freedom for Birth is a powerful call for reproductive justice. This 2012 documentary exposes the extent to which women around the world are denied the right to choose how and where to give birth. Watch the intrepid campaign to free Hungarian midwife Agnes Geréb from house arrest after her imprisonment for championing women's right to choose. Hear women recount the trauma of being forced by courts to surrender to surgery or threatened with having their babies taken by welfare services. Enjoy the company of like minds, discussing experiences of women and midwives in Australia and sharing ideas about how we can win birthing rights and reproductive justice.

Join in discussion of Radical Women's statement about transphobia in the feminist movement. RW explains how radical feminists' biological determinism leads to a male-phobic and transphobic deadend-twisting feminism, a driving force for human liberation, into its opposite.

Come with your ideas of how to fight the oppression that trans people face under capitalism. Brainstorm how to advance trans issues in political and social justice movements. Everyone is welcome!

Unpacking Transphobia is available here or in hardcopy on the night.

A delicious springtime dinner will be served at 6.30 pm for an $8.00 donation.

This RadicalWomen meeting will be held at
Solidarity Salon, 580 Sydney Road, Brunswick (between Blyth & Stewart Streets). Take Tram #19 or the Upfield train to Anstey Station. Lots of parking available off Staley Street.

Marissa Alexander is a mother of three, living in Jacksonville, Florida. She was sentenced to 20 years in prison in May 2012 for defending herself from her violent estranged husband. In August 2010, only nine days after giving birth, Alexander fired a warning shot into the wall of her house when her husband threatened her life. The court rejected Alexander's "stand-your-ground defence" and sentenced her under Florida's mandatory minimum sentencing rules.

On September 26, 2013, a Florida appeals court quashed her sentence and ordered a new trial. The court cited an error by the trial judge, but this turnaround is because of determined and tenacious mobilising by the broad, community-based Free Marissa Now campaign, which has spread internationally. The campaign is demanding that the case be DROPPED - Marissa should not have been charged in the first place!

Radical Women is working closely with Free Marissa Now. Melbourne RW initiated a Free Marissa contingent for Reclaim the Night to build the call from Australia - where the imprisonment rate for Aboriginal women in Victoria doubled in the past five years and 80% are mothers! - to end this sexist, racist injustice.

The Free Marissa contingent will meet at 7.00 pm outside the Brunswick Mechanics Institute, corner of Glenlyon & Sydney Roads, Brunswick. Look for our placards.

For more information, get in touch with Radical Women: via facebook, email radicalwomen@optusnet.com.au or phone 03-9388-0062 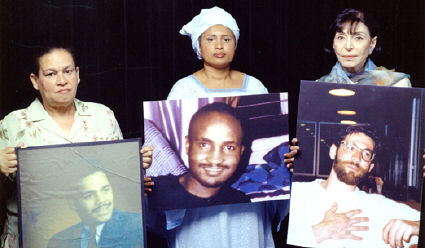 This gripping documentary follows three mothers in New York City who became unintentional activists against police brutality. Iris Baez, Kadiatou Diallo, and Doris Busch Boskey each grieved the murder of an unarmed son by NY police. The 60-minute film showcases the mothers - Puerto Rican, West African, and Jewish - as they come together to seek justice. During their quest, cover-ups and lies are discovered and they find the "justice" system is stacked against them. But - just like the Aboriginal mothers, who tenaciously campaign to bring out the truth about deaths in custody - this does not stop the women's courageous fight.

Saturday, 12 October, 12:30 pm
Rally: Don't let Abbott take away our right to choose --
Defend our abortion rights!
On October 12, anti-abortionists will march on Melbourne to protest Victoria's 2008 legalisation of abortion. This annual "March for the Babies," organised by the rightwing Victorian MP Bernie Finn, aims to make abortion a crime again. Join the counter-rally to defend our abortion rights and say We're never going back!

Women's rights are under the gun, because the profit system is sinking. It needs us back in our homemaker role: reproducing the workforce and looking after it, for free. Australia now has a Prime Minister known for his misogyny and anti-abortion zeal. The New South Wales Parliament is debating a personhood bill. If passed, "Zoe's Law" would introduce the legal rights of a foetus, which would prevail over the woman's rights. From now until November, the bi-annual "40 Days for Life" is harassing clinics across the country in its mission to shut them down. These assaults on women's most fundamental right-to control our own bodies and make independent decisions about our lives-are coming from a growing, organised international rightwing movement hell-bent on preserving the economic and social status quo.

The global misogynist, racist, homophobic far right is mobilising. So must we, the 90% of Victoria's population who believe in women's reproductive freedom.

To participate with Radical Women, call 9388-0062 or email radicalwomen@optusnet.com.au

Racism, sexism, dispossession and slavery have served up immeasurable riches to the capitalist elite and unspeakable misery to the rest of humanity. The oppressed have never stopped rising up, and fires of revolt are lighting up world.

This study circle will use two groundbreaking works, Women of Color: Front-Runners for Freedom and Estamos en la Lucha: Immigrant Women Light the Fires of Resistance, to explore the important leadership role of women of colour in all social justice struggles. The challenges and rewards of organising across colour lines and building a united, militant feminist movement for revolutionary change will be discussed. Everyone is welcome to join in!

Snacks available for a $5.00 donation. For more information or to get the readings in advance, phone 03-9388-0062 or email radicalwomen@optusnet.com.au. To find out more about Melbourne RW, check out Radical Women - Australia on facebook.

Monday, 30 September, 7.00 pm
Radical Women meeting and working bee
Free Marissa Alexander
Stop the legal lynching of an African American domestic violence survivor
Marissa Alexander, a 31-year-old African American mother of three living in Jacksonville, Florida, is serving 20 years in prison for defending herself from her violent estranged husband. In August 2010, only nine days after giving birth, Alexander fired a warning shot into the wall of her house when her husband threatened her life. On May 11, 2012, a judge rejected Alexander's "stand-your-ground defence" and sentenced her under Florida's mandatory minimum sentencing rules.

Learn about the growing international campaign to release Marissa and help Radical Women prepare a solidarity contingent for Reclaim the Night on October 19.

A delicious springtime dinner, catering for all diets, will be served at 6.30 pm for an $8.00 donation. Everyone is welcome!

For more information, get in touch with Radical Women:
Email radicalwomen@optusnet.com.au or phone 03-9388-0062 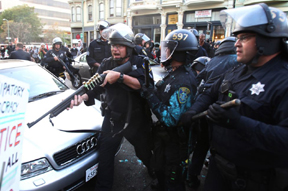 This Radical Women meeting will put under scrutiny a widely held belief that gun control is needed to curb the violence in our society. Based on "A Socialist Take on Gun Violence, State Violence, and Workers' Right to Self-Defence" by Monica Hill (Freedom Socialist, June-July 2013), the discussion will question what is the chief killer -- guns or a violent system? -- and explore how we can make society safe.

Come with your ideas, and be in the lucky door prize draw! Proceeds will go toward the $100,000 international fund drive for the Freedom Socialist newspaper. To get a copy of the article, click here

A hearty winter dinner is served at 6.30 pm for an $8.00 donation. Everyone is welcome!

Solidarity Salon, 580 Sydney Road, Brunswick
Take Tram #19 to Blyth Street or the Upfield train to Anstey Station. There is also plenty of parking. 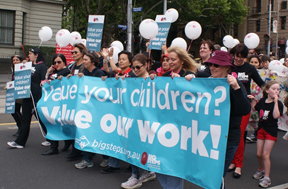 Come to a public meeting to discuss why equal pay advocates, reproductive rights campaigners and other feminists and unionists are fans of the United Voice Big Steps campaign. This initiative by early childhood educators is organising to win funding to improve pay for these low paid workers. It insists that quality early childhood education is a social responsibility and funding should come from government, not from the pockets working parents. Access to high quality education and care for pre-school aged children is a necessity for working parents and fundamental to women being able to exercise choices. Winning pay rises for the predominantly women workers who educate and care for children is also key to closing the gender based pay gap.

Hear from campaigners, share your experiences and ideas and discuss how together we can achieve big steps forward for both women workers and children. 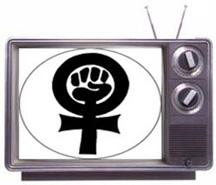 From fast cars to holidays, fashion to junk food, the market turns women into sexualised objects to lure consumers. Explore how advertising and the media use sexism, racism and homophobia to sell products and shape how we see ourselves and others.

Come hear:
• Angeline Ferdinand, queer woman of colour with a special interest in the health of marginalised people and reproductive justice activism •

• Rebecca Wickham, Fed Up? activist and therapist in body image and eating issues

Join in discussion about how we will liberate ourselves! Everyone is welcome, kids too!

Co-sponsored by Radical Women and Fed Up?
For more information, contact Radical Women: 03-9388-0062 or radicalwomen@optusnet.com.au 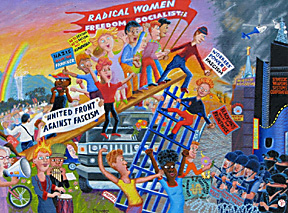 Melbourne Radical Women (RW) held its first public event in Australia in April 1983. The Freedom Socialist Party (FSP) held its founding meeting a month earlier. We've been on the front lines of the struggle for a socialist feminist future ever since.

Enjoy rousing oratory about key working class milestones, remember battles won, pay tribute to those who led them and draw out the lessons learned. Come and tell your stories. Step up to the open mic to share your memories - inspirational or funny, recent or ancient - of working with RW and the FSP. Decide how you'll contribute to the next 30 years! Everyone is welcome!

Join a multi-generational, multi-racial, multi-sexuality, multi-gendered contingent at Melbourne's IWD 2013, and voice the many more demands of women.

• Increase welfare payments; tax the rich - a secure, livable income for all
• Reproductive freedom for all women
• Free, quality, 24-hour childcare
• Equal pay for work of equal value
• Expand TAFE - free, quality education and training for all
• Quality, secure, affordable housing for everyone; fund and build public housing
• End the Northern Territory Intervention; scrap the Basics Card; recognise the sovereignty of Australia's Aboriginal nations
• Full citizenship rights for refugees and immigrants; open the borders
• End all discrimination against LGBTIQ sisters and brothers
• Stop the use of women's bodies for capital; end sexism in advertising and the media

If you've had enough of being done over by the sexist profit system and want to fight back, bring your demands!