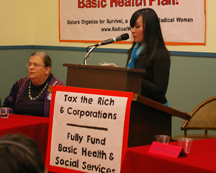 On November 14, in a packed "people's court" room at Rainier Community Center in south Seattle, cheers, tears and anger resonated at a public inquiry on the impact of a $238 million reduction to the state Basic Health Plan.

"Judge" Christina L&ocautepez, president of Seattle Radical Women, presided over the Community Tribunal, which heard from five witnesses and a score of individuals on the local and national health care crisis. Although all state legislators were invited, only Senator Adam Klein from the 37th District attended to offer advice and support. The "jury" of all present was asked to rule on the charge that "the governor and state legislature are guilty of abandoning poor and working people by cutting Basic Health and essential services."

Rate increases that go into effect on January 1 are expected to force 40,000 recipients off the program that currently serves over 100,000 low-income people. Su Docekal, a Basic Health recipient who had just received notice of the 57% increase in her premium, coupled with a doubling of the annual deductible and a 20% copayment for hospitalization, emphasized "It's hard to stay on Basic Health if you're sick."


900,000 uninsured in Washington State
The total number of women, children and men without medical insurance in the state is nearly 900,000. The barriers faced by many ill people were movingly described by Kami Bodily, a Lupus sufferer, who was forced into bankruptcy because of high medical costs even though she was employed and covered by insurance. She was later denied insurance because of her pre-existing condition; after she could no longer work, she fought for eight years to get on Social Security.

Lois Thetford, a Physician's Assistant at the 45th Street Medical Clinic in Wallingford, which serves high numbers of low-income and homeless people, reported that "the infant mortality rate for African Americans and Native Americans in Washington State is 90% higher than for white Washingtonians." Service cuts have been "disastrous" for her clients and forced the layoff of 22 staff in the Neighborcare Health network of clinics.

Thetford noted that health providers in rural areas where few people have employer-paid insurance rely on Basic Health. Without Basic Health, she said, 25% of rural clinics would be forced to close.

Minister W.D. Patterson, of Outreach Ministries, an advocate for health care access for the African American community, including gang members and substance abusers, described being a stakeholder during the formation of the Basic Health Plan. Public intervention in state health affairs is stymied, he said, by an assortment of health policy

boards operating in "stealth mode." He advocated that groups work together to overcome these obstacles.

National health care reform under discussion will not resolve state crisis
An activist for national single-payer health reform, Martha Koester, said the current national bill being considered is fraught with problems. Koester says that the bill does little to contain costs, the public option "is not open to general members of the public," and "people have to buy private insurance or be criminals." The bill also has prohibitions against abortion and will not cover many immigrants. If passed, major provisions will not take effect for three years.

Cee Fisher, speaking for Radical Women which organized the event as part of the Sisters Organize for Survival campaign, described being shocked when she saw the inadequacies of the U.S. health system after growing up in the Philippines, where the U.S. was portrayed as "a land of milk and honey." Her call for funding health, education and other services through a steeply graduated state income tax for individuals and corporations was loudly applauded.


Tribunal calls for inclusive and accessible health care
The multiracial, cross-generational assembly paralleled the broad range of interests represented by the tribunal's 30 endorsers, which included poverty groups, labor unions, and organizations of people of color, immigrants, gays, socialists and students. Participants want Basic Health to be expanded not only by the number of individuals served, but also by including dental and optical coverage. Charlie Blackwolf called for inclusion of mental health care and deplored the racial bias she had experienced as a Native American in the medical system. Two unidentified Black women spoke of bias and mistreatment based on skin-color as well.

After everyone had their say, the verdict was a unanimous "guilty" on the charge of neglect by government officials and unanimous approval for funding Basic Health and other essential services through taxing the wealthy and profits of large corporations. The audience voted to keep up the pressure to save Basic Health through petitioning, mounting a call-in campaign, and "packing legislative hearings." Participants also supported the call for groups and individuals to converge at the State Capitol to pressure elected officials to not cutback on any human services.

A parting reminder from witness Rodolfo Franco, president of Washington Federation of State Employees Local 304, underscored the resolution expressed by the crowd: "The only way people lose power is to think they don't have any."

The Sisters Organize for Survival campaign will continue its actions for Basic Health and will hold public mobilizing meetings every Thursday at 7pm at New Freeway Hall, 5018 Rainier Ave. S., Seattle. For information: (206) 722-6057, RWseattle@mindspring.com www.RadicalWomen.org.