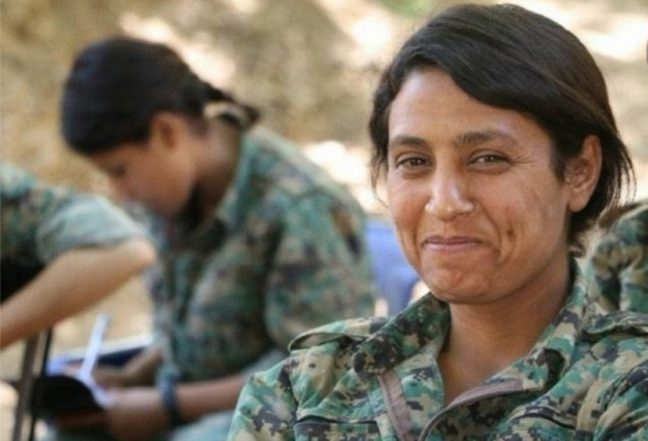 Radical Women adds its voice to the universal condemnation of the horrific abuse of the corpse of a courageous Kurdish militiawoman, Barin Kobani, by members of the Free Syrian Army. Kobani and three of her sisters in the Kurdish women’s militia were killed on January 30 as they defended a Kurdish town from attack. The Syrian fighters stripped Kobani partly naked, mutilated her body, and took photos and video of themselves standing on her breasts and degrading her verbally. As a brazen threat to other Kurdish fighters, especially the militiawomen, the abusers sent their recordings to the Syrian Observatory for Human Rights.

The Free Syrian Army is in league with the U.S.-allied Turkish government in a war to crush the Kurdish people, whose territory spans the borders of five countries. The Turkish government has failed to condemn the atrocity against Kobani and some Turkish commentators have praised the outrage as what women deserve who take up arms. Defiling Kurdish bodies, refusing to let them be buried, and withholding identified remains from their families is a longstanding tactic of the Turkish state. Radical Women supports the rights of the Kurdish people, and all oppressed nations, to self-determination and equal rights. We denounce the ugly hatred of women that characterizes political reactionaries from Syria and Turkey to the United States.

Radical Women stands with Berivan Hesen, the female co-president of the Kurdish civil government in Kobani, Syria, in saying that “every woman in the world was hurt by what happened to Barin Kobani.”

We demand: No U.S. aid to Turkey. Victory to the Kurdish resistance. Free all political and feminist prisoners in Turkey. Dignity and human rights for women in all lands.