March 8 is a day to honor the strength of working-class women and their battles for equality and justice. Initiated by socialists over 100 years ago, the holiday's rebellious spirit is alive and well.

Today, we celebrate courageous sisters in all parts of the globe, from Palestinian mothers fighting for a homeland, to Syrian women holding families together in refugee camps; from Turkish women who faced rubber bullets at a gender equality rally this week, to working women who have gone on strike to protest cuts to pay, pensions and social services. 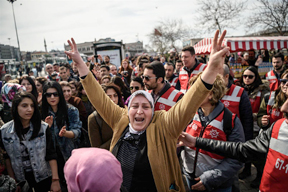 Join me in a rousing roar of respect to Nestora Salgado, an indigenous feminist leader, naturalized U.S. citizen and political prisoner in Mexico. Last month the United Nations Working Group on Arbitrary Detention ruled that Salgado’s arrest and imprisonment are illegal. (Connect with the Libertad para Nestora/Free Nestora Salgado to help build support for her release.)

A heartfelt toast to the life of Berta Cáceres, a Honduran indigenous activist and environmental leader who was assassinated last week. Cáceres led a decade-long fight to stop construction of a giant hydroelectric dam on the Rio Gualcarque. People in the U.S. must denounce our government's complicity in Cáceres murder through its funding and training of Honduran security forces, which have ties to Honduran death squads. Berta Cáceres, ¡presente!

Let’s also give a spirited salute to vibrant voices within the United States. To the fast-food workers fighting for $15 an hour. To the hundreds who hit the streets to assert that Black women’s lives matter. To immigrant women and transgender people in ICE detention centers who are bravely demanding basic human rights. To abortion rights activists who rallied on the steps of the U.S. Supreme Court. 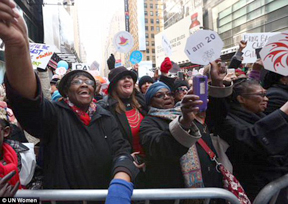 A shout-out for Rasmea Odeh, a gutsy Palestinian-American community leader who just won a major victory in the effort to overturn her conviction on trumped-up U.S. immigration charges – retaliation for her decades of work to empower Arab women and end the occupation of Palestine. (See the Committee to Stop FBI Repression for more info.)

It's thrilling to see women, young and old, of every race and ethnicity, standing up to attacks, reaching out to allies and agitating for justice.

And then there's the U.S. presidential elections.... An array of repulsive Republicans versus a female front for imperialism versus a self-identified democratic socialist who is firmly embedded in a purely capitalist party. None of these candidates will solve the problems of women, people of color, queers, workers, immigrants or political prisoners. But don't despair, our efforts to build a united mass movement for radical social change will have a bigger effect on the shape of things to come than the 2016 elections.

So let’s unite to work on issues and confront capitalism's foundations in poverty, misogyny, bigotry and injustice. Together we can gain a deeper understanding of how working people have the power to create a society of shared wealth, health and respect for all.

In this struggle, the global leadership of working-class women will be an invaluable force for human survival and revolutionary change.